Details
by United Nations
in Drop by Drop 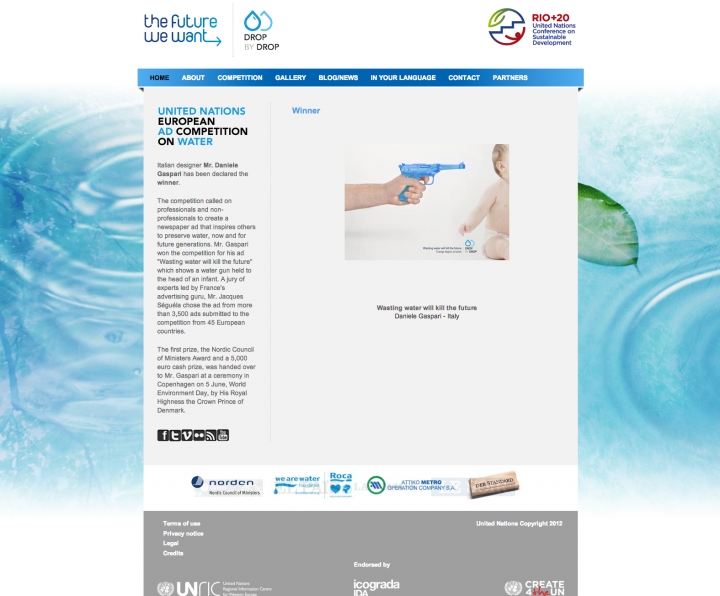 The „Drop by Drop“ UN European Ad Competition called on professionals and non-professionals to create a newspaper ad that inspires others to preserve water, now and for future generations. The competition was organized to galvanize support for the Rio+20 UN Conference on Sustainable Development in June 2012 and the UN Secretary-General´s initiative „the Future we want“.

Italian Designer Daniele Gaspari won the competition for his ad Wasting water will kill the future which shows a water gun held to the head of an infant. The ad from more than 3,500 ads submitted to the competition from 45 European countries. Many of them were published in newspapers and even books and displayed in Belgium, the Netherlands, France, Germany, Denmark, Russia, Sweden, Iceland, Finland, Norway, Greenland, Lithuania, Estonia, Latvia and Greece.

The first prize, the Nordic Council of Ministers Award and a 5,000 euro cash prize, was handed over to Mr. Gaspari at a ceremony in Copenhagen on 5 June, World Environment Day, by His Royal Highness the Crown Prince of Denmark. Eszter Szigethy of Hungary won the Youth Prize for her entry Save Earthlings and Turkish graphic designer Toprak Onur won the public vote for his contribution, Save your children.Drop by Drop